June 04, 2014
There’s a bad moon shining
through my kitchen window.
It even has the animals spooked.
I haven’t heard an owl or even
a dog bark for three hours now.

Ms. Jackson says her voodoo lily
is about to bloom and she’s been
out there watching that plant in the garden
since way before sunset.

She said, “Twila, that flower is gonna
stink like the dead just been pulled
from the grave, but it’ll smell better
than all those secrets fermentin’ inside you.”

I don’t know how that crazy old woman does it.
If you make the mistake and look her in the eyes,
she’ll crawl into your pupils to dig through lies
until she finds what you don’t want the world to know.

I’m not getting near Ms. Jackson tonight.
She can stay out there alone on bended knees
waiting for that plant to deliver its swamp Jesus.

I’ve got a name tucked deep in my ribs where
nobody can cut it from the bone unless I surrender the knife.

This is the third poem in my Twila series.
Dark Hymns Of The Live Oak
Beneath The Atchafalya Moon 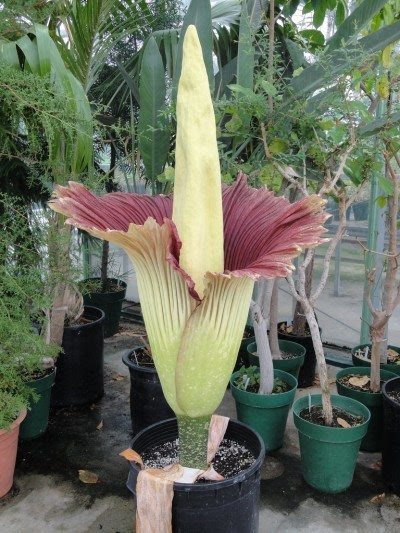 Voodoo Lily plants are grown for the gigantic size of the flowers and for the unusual foliage. The flowers produce a strong, offensive odor similar to that or rotting meat. The smell attracts the flies that pollinate the flowers. You can find out more about the plant here.

Carrie Van Horn said…
Poetry and prose the Twila series always leaves you amazed yet longing for more. This is captivating Susie. :-)
June 4, 2014 at 10:51 PM

Jim said…
Got to stay away from those Voodoo Lily plants, the crazy Mrs. Jackson too, Susie. This reads so nicely, I was in lower Louisiana there with them. I think I saw a Voodoo Lily yesterday but I didn't know its name.
..
June 5, 2014 at 7:00 AM

Kerry O'Connor said…
Your Twila poems are just excellent, Susie. I am thrilled to get the chance to read the next in the series. The voodoo lily scares me a bit, I have to say, as would Ms Jackson herself.
June 5, 2014 at 9:05 AM

Susan said…
Wow. From the top I am hooked into this story. I especially like "If you make the mistake and look her in the eyes, she’ll crawl into your pupils to dig through lies until she finds what you don’t want the world to know." Add that to what she can smell out, and I fear her finding that knife.
June 5, 2014 at 10:22 AM

Sherry Blue Sky said…
This series is powerful and intriguing, Susie. I love the Ms Jackson character, kneeling to her swamp Jesus. Brilliant!
June 5, 2014 at 11:03 AM

Grandmother Mary said…
Gawd, this is good, in a creepy sort of way. Your vivid descriptions are perfect and I have to agree with the sound-like-a-book folks. I'd read it for sure!
June 5, 2014 at 11:37 AM

Hannah said…
This is scary:

"I don’t know how that crazy old woman does it.
If you make the mistake and look her in the eyes,
she’ll crawl into your pupils to dig through lies
until she finds what you don’t want the world to know."

hedgewitch said…
Really atmospheric, really, as others have said,creepy, but it's more than the easy creepy of generic horror genre stuff--it's the creepy that comes when your inner self is snuck up on and threatened by something you can't control. Not expressing it very well, but I loved this poem, Susie.
June 5, 2014 at 2:11 PM

Anonymous said…
What a wonderful character you've created! Fascinating flower.
June 6, 2014 at 9:14 AM

Photo: Caroline Madsen Wind carries wild grass music notes to my fingertips, and I get lost in a prairie sonata of summer. ©Susie Clevenger 2020

When the Stag Appears

Digital Art by : Louisa Azevedo When morning withdraws its saber from the moon’s heart, wild things stir to drink the blood of dreams, to taste hope in its innocence.   In the ethereal unrest of rising - visions swim the edge of alarm clock’s routine playing tug of war with alert and sleep’s siren.   Cautiously plans shape-shift from vague into clarity…The stag leaps from the calendar erasing familiar with the urgency of change.  ©Susie Clevenger 2020 Poets and Storytellers United ~ Writer's Pantry #24 The Sunday Muse #112

Light in the Grave of Blooms

Natural Woman ~ Susie Clevenger Stars drop in glitter exclamations among strands of braided auburn curls as Antheia walks the grave of blooms.   Ignoring winter’s icy taunts, she dances on the rotted breast of petals singing psalms to sleeping spring of bright color soon to escape the swaddling of dark roots.   With emerald brush she paints the blackened wool of midnight’s scowl with swaths of green, and fills her lungs with moonlight so every breath is seeded with a dream.   ©Susie Clevenger 2021 Antheia is the Greek goddess of flowers and flowery wreaths. There are times when the only way to ease fear is to pour light into ink. The Sunday Muse #146   Poets and Storytellers United ~ Writer's Pantry #56